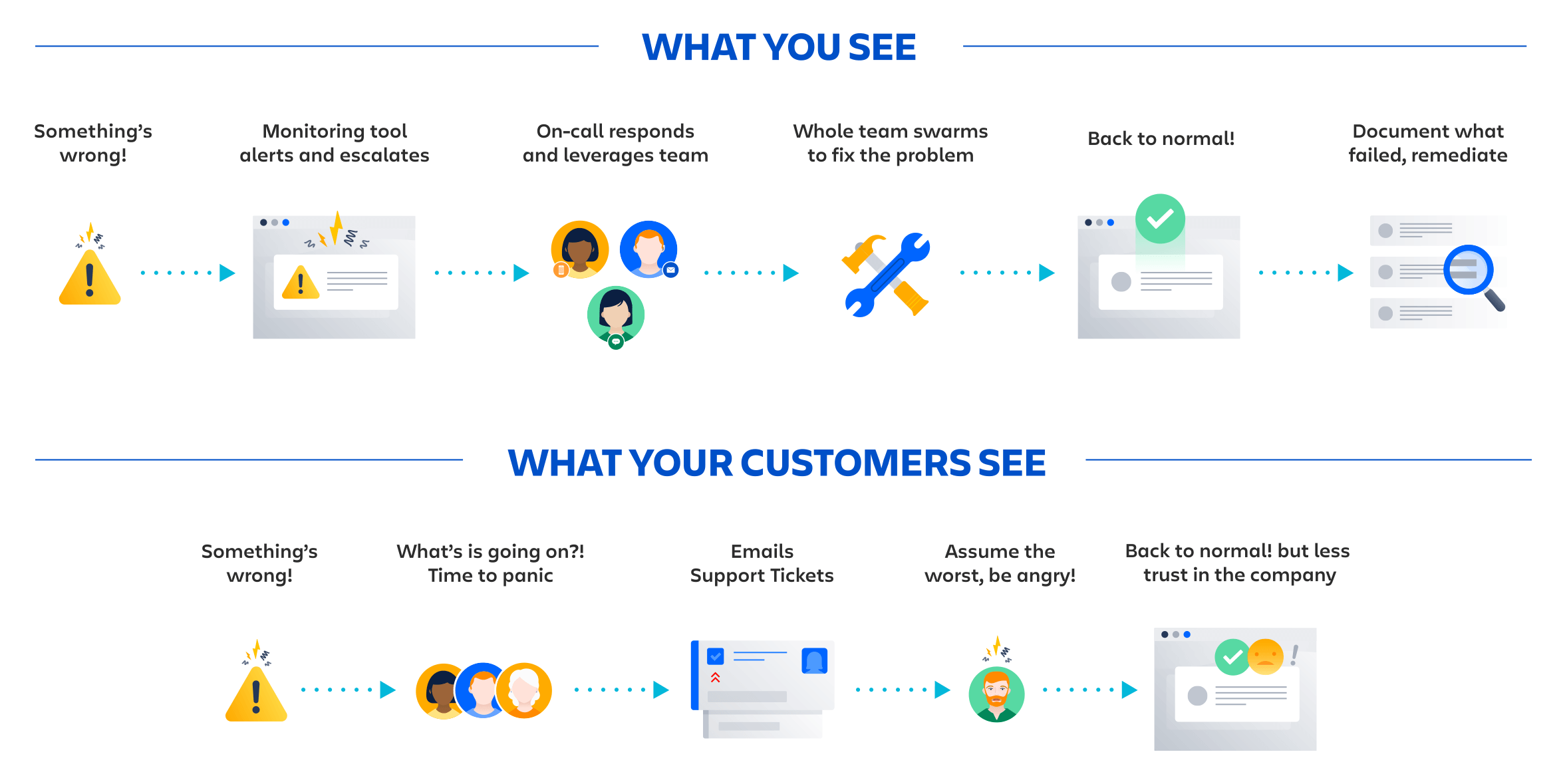 Statuspage also make it easy to embed status information directly onto any website customers operate. We know most visitors are likely to check a provider’s home page or support page before looking for a status page. The embedded widget (here's an example) is an easy way of letting those visitors know if an incident is underway. Visitors can also click through on the widget to get to the status page.

You can give your audience the option to subscribe to email updates with a product like Statuspage at your disposal. Whether you’re sending directly from your email tool, or using a status page to trigger email sends, email a reliable channel for incident communication.

Reduce context switching and information gaps for employees and agents with Halp. Halp powers Jira Service Management to sync conversations in Slack or Microsoft Teams and your tickets. Seamless conversation between popular chat tools and support helps to provide robust context to a problem, leading to a fast resolution.

Receiving an SMS message, or text message, is often a more immediate way to reach someone, and a preference for many people when it comes to critical inbound alerts like a downtime announcement. It’s also a channel where people can be message fatigued very fast and will unsubscribe if they see too many messages that aren’t relevant to them.

None of these channels are a silver bullet for incident comms. They all have different strengths and the real power comes when you layer them together. For example, at Atlassian, we post incidents to a status page but also push those updates to Twitter. An announcement about the incident is also visible on our Jira Service Management portal. These messages then direct the user back to the status page for more details on the incident. Managing incidents in Jira Service Management allows for multiple points of communication without getting wires crossed or losing your customers' trust in translation.

Tailor alerts and communications to the right audience

When an incident arises, you need to know who to communicate to, how to reach them, and how to do it with the least friction and fewest resources possible in order to avoid a customer service nightmare and/or communication meltdown. It’s best to start internally with an immediate response team and work outward, curating messages for the appropriate audience.

While every organization is different, in general it helps to think of these audiences as 5 distinct groups that need to be communicated with:

Before anything else, internal teams on the back end of an incident should have an established communication platform and be ready to swarm when an issue arises.

Centralizing and filtering alerts across monitoring, logging, and CI/CD tools ensures a fast response from your team. With a platform like Jira Service Management, teams can quickly swarm an incident, gain context, and stay in touch throughout the duration of an incident.

From Google’s book “Site Reliability Engineering” on the role of communication lead:

This person will also be in charge of continuing to update the status page or post updates to other channels as the situation evolves. Even an update saying “We’re still working on the problem, nothing new to report,” is better than saying nothing and leaving your audiences hanging. People left in the dark start to expect the worst.

Communication with affected users and other stakeholders is imperative. Use your pre-determined channel(s) to tell users what’s going on. On a homepage, this may be a Statuspage alert to help customers see that your team is aware of the problem and saves agents time from dealing with redundancy. Keep customers in the loop using multiple notification channels, including SMS, email, and mobile push.

Whatever tool you choose to use, we recommend that you identify one as your primary communication vehicle and funnel everyone there from the other channels. Managing incident communications through Jira Service Management ensures the right messages get to the right people.

Language like this makes it easy for your customers and colleagues to trust that you’re running a level-headed team and keeping your eye on the ball. Browse our own incident response postmortem template for more ideas.