In their simplest form, pull requests are a mechanism for a developer to notify team members that they have completed a feature. Once their feature branch is ready, the developer files a pull request via their Bitbucket account. This lets everybody involved know that they need to review the code and merge it into the master branch.

Many of these values will be set to a sensible default by Bitbucket. However, depending on your collaboration workflow, your team may need to specify different values. The above diagram shows a pull request that asks to merge a feature branch into the official master branch, but there are many other ways to use pull requests.

The Feature Branch Workflow uses a shared Bitbucket repository for managing collaboration, and developers create features in isolated branches. But, instead of immediately merging them into master, developers should open a pull request to initiate a discussion around the feature before it gets integrated into the main codebase.

After receiving the pull request, the project maintainer has to decide what to do. If the feature is ready to go, they can simply merge it into master and close the pull request. But, if there are problems with the proposed changes, they can post feedback in the pull request. Follow-up commits will show up right next to the relevant comments.

Features are generally merged into the develop branch, while release and hotfix branches are merged into both develop and master. Pull requests can be used to formally manage all of these merges.

The two developers could discuss and develop the feature inside of the pull request. When they’re done, one of them would file another pull request asking to merge the feature into the official master branch. This kind of flexibility makes pull requests very powerful collaboration tool in the Forking workflow.

Mary wants to merge her feature into the main codebase, so the source branch is her feature branch, the destination repository is John’s public repository, and the destination branch is master. She’ll also need to provide a title and description for the pull request. If there are other people who need to approve the code besides John, she can enter them in the Reviewers field. 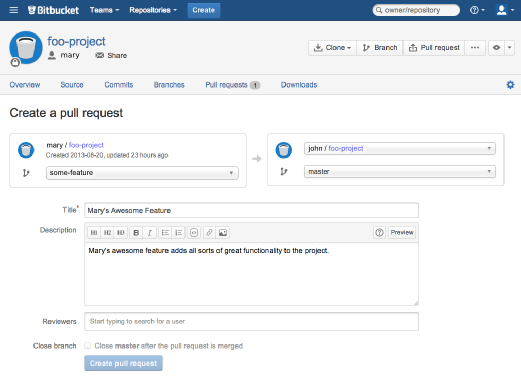 If he thinks the feature is ready to merge into the project, all he has to do is hit the Merge button to approve the pull request and merge Mary’s feature into his master branch.

Finally, John accepts the changes, merges the feature branch into master, and closes the pull request. The feature is now integrated into the project, and any other developers working on it can pull it into their own local repositories using the standard git pull command.