Become an expert at project execution

How to map out your plan to nail it

Your team does everything it can to get projects off on the right foot. You host kick-off meetings to get all of the key players on the same page, map out detailed timelines, and collaborate with everybody on a project plan.

All of the pieces are in place. And then...the wheels fall off.

Deadlines end up getting pushed over and over again. That project plan is now more like a suggestion than a rule. There’s confusion, frustration, and you all feel like you wasted the time you spent getting your ducks in a row.

What’s the problem? Well, your project planning is top-notch, but your project execution is seriously lacking.

What is project execution?

Project execution means that you’re rolling up your sleeves and taking action on everything you outlined in your project plan. Put simply, you’re executing those strategies (how’s that for being literal?) to get the project across the finish line.

You might also hear project execution referred to as project implementation. That’s another fancy name that means the same thing.

Execution is the third step of the typical project lifecycle, which has four total stages: initiation, planning, execution, and closure.

Think about it in the context of your personal life: establishing a budget is the easy part. It’s actually following it that presents the challenge (especially when you really just want to cave in and order pizza regardless of what your wallet says).

An execution gap sounds scary, doesn’t it? Well, it sort of is.

Whether you’re thinking about your failed personal budget (hey, we’ve all been there) or a team project that isn’t going to plan, an execution gap (often called a strategy gap) represents a disconnect between vision and reality.

You know how you mapped out all of these strategies and best-laid plans for your project? When you’re unable to actually follow through on them and meet your goals, that’s an execution gap comin’ to get you.

Unfortunately, these disconnects are common. According to Project Management Institute’s 2017 Pulse of the Profession survey, executive leaders said that only 60% of their strategic initiatives met their goals.

There are numerous potential causes of execution gaps, such as goals and timelines that are too ambitious, little to no clarity about the vision or goals for the project, and even lack of buy-in from key players.

One of the biggest causes relates to your project’s resources. Resources are the materials you need to finish the project. They can include specific departments or team members, time, and actual materials (think things like software programs, meeting rooms, and more).

When we’re planning projects, we fall into the trap of thinking of them in a vacuum, as if that project will be everybody’s sole focus for as long as it’s on their plates.

It never works that way in reality. That project is squeezed in between other daily responsibilities and fires. Resources become way more strapped than we thought they’d be when we were planning the project with that “pie in the sky” attitude.

You end up having to compete or prioritize the resources you need, and sometimes you end up just plain waiting for them. These bottlenecks undermine the plan and timeline you originally mapped out.

Or worse, they destroy your project entirely. Project Management Institute’s 2018 survey found that 21% of projects fail due to limited or taxed resources.

Project execution strategies get across the finish line

Here’s the million dollar question: how do you close gaps once and for all? Below are a few different strategies you can use to give your team’s project execution a much-needed boost.

Ensure alignment right from the start

It’s tough to execute on something if you don’t understand why it’s happening in the first place. Yet only 55% of people involved in projects feel that the project’s business objectives are clear to them.

You need to get everybody on the same page before the project gets rolling. Start with an effective kickoff meeting where you can talk through the project’s goals and the plan for how you’ll achieve them. Leave plenty of time for questions so you can proactively address questions or concerns.

Maybe you’re thinking, “We always map out a detailed project charter that people can refer to.” Ask yourself: when’s the last time you waded through a lengthy document just to get a simple answer or direction? Not often, right?

You’re better off creating a project poster, which is a collaborative document that outlines the problem your project is solving, along with the scope and any potential knowledge gaps. Your project poster is a living document, so it can evolve as your project does.

After all, successful project execution doesn’t mean that your plan isn’t allowed to change as you learn and make progress. Things still come up, and you need to be flexible.

When planning cross-functional projects, it’s easy to operate with the assumption that moving the project between teams will be painless. You imagine a seamless passing of the baton in a relay race (maybe there’s even a soundtrack of “Eye of the Tiger” or “Chariots of Fire” playing in your mind).

Sadly, reality is way more complicated than your imagination. When it comes time to actually hand the project over to another team, sometimes there’s a lot of fumbling around and starts and stops.

That’s because other teams aren’t able to just step in on projects at the drop of the hat. Bearing this in mind, it’s smart to build in some cushion time specifically for handoffs when you’re planning your timeline. That gives the incoming team a little bit of leeway to get up to speed.

Keep all other teams in the loop about project status updates, changes, and more so that they aren’t stepping in blind when it’s their turn to take over. Confluence has project management templates that can help with this.

Don’t forget about the domino effect

Remember when we talked about the trap of planning your project in a vacuum? You need to be mindful that your project is going to rely on and compete for limited resources.

That’s why you need to spot any task or resource dependencies during your planning stages so you can account for them in your process and timeline right away.

For example, is there a step of your project that can’t be completed until several other preceding tasks have been checked off? That’s a task dependency. Does your company’s data scientist have really limited schedule availability, and you’re at the mercy of his workload? That’s an important resource dependency to consider.

Proactively planning for these things can help you execute a far more seamless project, especially when you consider that some common causes of project failure include:

You can also use the Critical Path Method (CPM) to ensure you’re being realistic about your timeline. It sounds like a heavy lift, but it’s simple in practice.

Basically, you need to identify the longest line of dependent tasks in your project. Think of these like a row of dominoes. If a delay happens along this critical path, it will set back the entire project. This helps you know where you have some breathing room, and where you need to stick as close to the schedule as possible.

You’ve mapped out a project plan, shared it with the team, and can now assume everything will fall into place. Because that's all it takes for projects to go smoothly.

Not quite. To nail you projects, you need to frequently monitor progress and course correct when necessary. You don’t just need a project kickoff and wrap-up meeting on the calendar; you need to schedule some regular check-ins as well.

During these meetings, you can tackle issues, clear up any confusion, and continue nudging your project in the right direction. You can also ask the team for their feedback on how the project is going to make sure everybody feels heard and like a valued contributor.

If you established signals and measures at the start of your project (which we highly recommend), these meetings are also a chance to thoroughly evaluate your progress.

No one wants to experience the sinking feeling you get when all of your careful project planning was a waste.

The good news is that you aren’t helpless. Using the project execution strategies we outlined will help you avoid investing energy into planning that, despite your best intentions, is full of pitfalls your team can fall through.

Even after applying these new tips, remember that it's a learning process. You might not execute your next project perfectly, and that’s okay! You’ll continue to improve with each new one you tackle. And, before long, you and your team will be lean, mean, project execution machines. 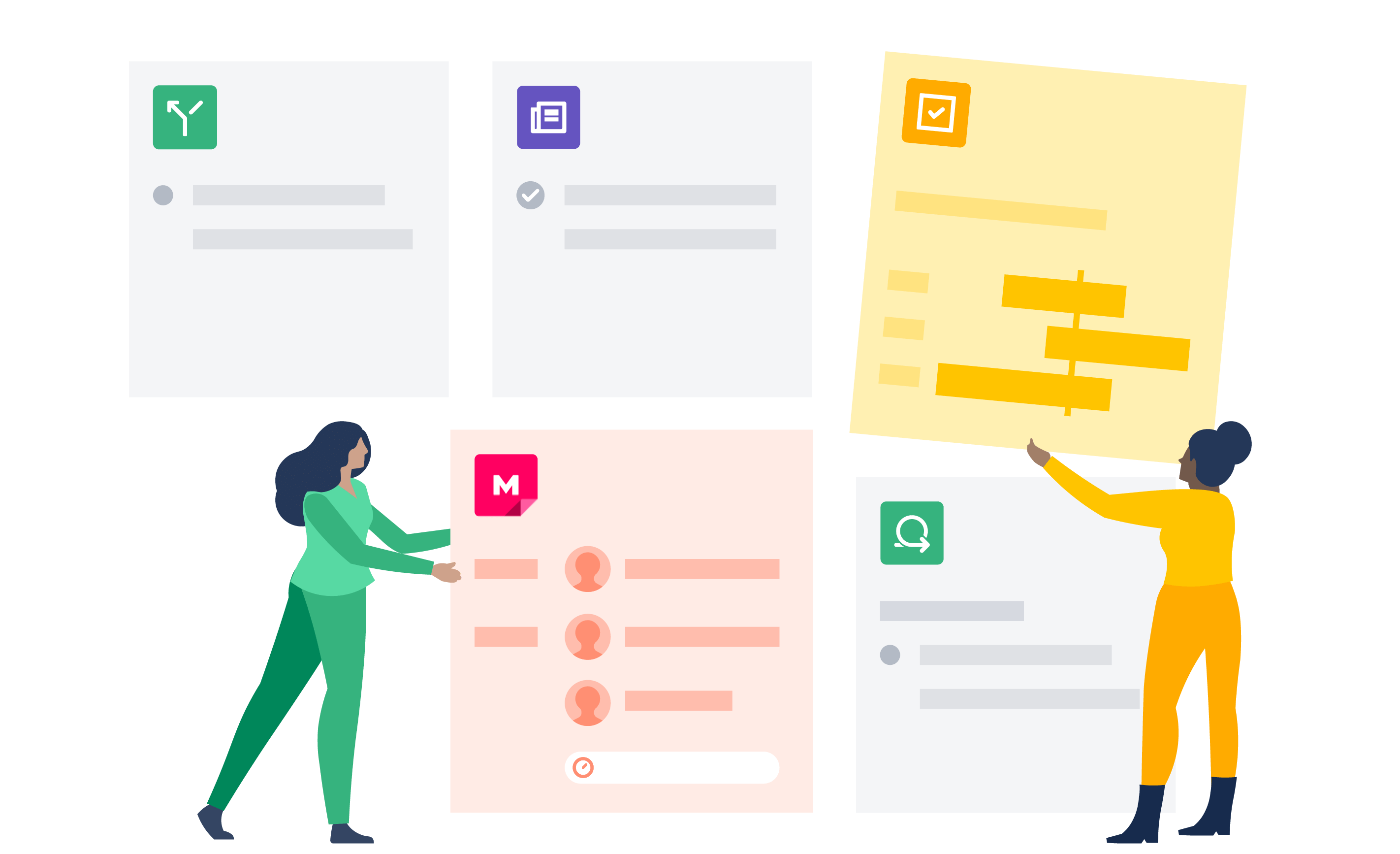