Every project involves trade-offs. Analysis early on will help you understand the relative importance of all the factors you're considering.

Create sliding scales to show how important each metric is and agree on what you should prioritise.

If you're struggling with shared understanding,  value and metrics,  managed dependencies,  velocity,  or decision making on your Health Monitor, running this play might help.

Make sure your team understands that most sliders are inter-dependent: if one goes up, at least one other probably has to go down.

The basic vectors for trade-off analysis are usually timing, scope, and budget. But you should also consider other metrics important to the project. They may include things like:

Prepare your whiteboard or butcher's paper with one bar for each metric, labeled with a name. These are your scales. Label the ends of each scale with a value: "most negotiable" on one end, "least negotiable" on the other.

Cut your sticky notes in half or thirds to create sets of sliders for each participant to place on the bars. Prepare an additional set of stickies (preferably in a different color) that you'll use as the final agreed-upon slider on each scale.

Use a different color sticky note for each person so it's easy for everyone to see (i.e., remember) where they placed their sliders.

Explain that your team's goal for the session is to reach consensus on what are the most and least critical aspects of the project.

Review the metrics you've decided to weigh, and ask if there are additional metrics you should create scales for.

Explain what "most" and "least" negotiable means for each metric. For example, if the project is estimated to take 6 weeks and you have a large marketing campaign scheduled, "least negotiable" would be time as it's paramount you deliver within 6 weeks, while "most negotiable" may be scope, as you drop the nice to haves in order to meet your deadline.

Discuss briefly which sliders have dependent relationships, and which are independent. Speed, scope, and cost are typically inter-dependent, while usability and scope may not be.

So as not to be biased by the group, have each person write down where they intend to place their sliders on each of the scale.

Once it looks like everyone has made up their minds, have them place their sliders on the bars.

Slide the sliders around (20 min)

Review the scales one by one, and invite the group to discuss why they placed their sliders where they did and get consensus. You'll probably have to revisit some of the scales and slide the sliders around as your team decides how to balance the relative priorities.

When you've reached consensus on all scales, lock in each sliding scale with the "final" sliders you prepared (preferably a different color than the sliders each team member placed).

If using a whiteboard, snap a photo of your scales before cleaning up the room

After running trade-off analysis, your sliders will look something like this.

Reaching consensus very quickly may be a sign that you haven't thought through many edge cases. Throw "what if" scenarios at your team to provoke some deeper discussion. (Or it may be a sign your team is just super-duper in sync. But toss in some "what ifs" anyway 😉)

Take it up a level when you choose the metrics to discuss. Which strategic bets are on or off the table? What are your key areas of investment? What operational metrics are critical to the business? What's the priority of lagging indicators against forecasts and leading indicators?

The pre-work will take a bit more time since each team member probably considers different metrics to be critical.

Customer satisfaction – do people feel they received a quality response and resolution?
Time to resolution – how quickly can/should you resolve a request?
Provider satisfaction – you might provide excellent service, but is that sucking the life out of your team and causing burnout?
Customer engagement – how much support should you provide via knowledge bases and FAQs vs. through direct customer contact?

If you drew your scales on butcher's paper, hang them up in your teams area for the duration of the project.

If you used a whiteboard, share a picture of your scales around to your team, as well as your stakeholders. Then print it out and hang it in your team's area. It's fine to capture your scales as a Confluence page, but don't just stash it away there – keep it physically visible if at all possible.

The team has a shared vision and collective purpose which they support, and confidence they have made the right strategic bets to achieve success.

The group is clear on their unique value proposition for growing the business and they can measure the intended impact. Success is defined, and measures identified.

Clear communication between team members to share insights, knowledge and learning which could lessen risk, complexity, resources, effort, and timelines facing the team.

You are viewed as “easy to do business with” from your key stakeholders.

The team reflects on, then leverages lessons learned and success to make more effective decisions faster. The group is renowned for and has established patterns for GSD (Getting $#!T Done).

Decisions are made at the right level with an appropriate degree of urgency and discussion in considering both short and long term implications, with trade-offs actively considered. Decisions are timely and effectively communicated. 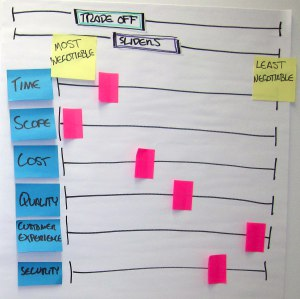