Winning at CI with feature branches and Bamboo

Branching makes it easier to release on a moment's notice – but there's a catch. 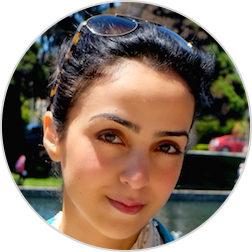 It's no secret that developers need freedom to make changes and run tests without the fear of messing up the main code line. And they can, thanks to branching – the magical element that allows for parts of the code to be modified, developed, and tested in isolation and in parallel.

Thanks to Git and Mercurial, prolific branching has passed from the realm of mythical practices into the world of the practical, as we discussed at length in 5 tips for CI-friendly Git repos. Yet despite all the benefits, using branches in a continuous delivery pipeline can create two distinct problems:

Duplication and drift of build configuration

Bamboo has addressed and resolved both these issues with a feature we call plan branches, which will be explained in detail here. Read on!

A plan branch is an element of your build plan in Bamboo that corresponds to a branch in your repository. They inherit all of the configuration defined by the parent plan, except that instead of building against main, they build against a branch. Then, when the branch build succeeds, changes can be merged automatically from the branch to main. Alternatively, successful branch builds can be deployed to a test environment using Bamboo's deployments features (more on that in another article).

As you can see in the screenshot below, our plan called "A CI Tests" is building not only main, but also the integration branch, and a handful of branches dedicated to single Jira issues (BDEV-10045-bump-tomcat-plugin-5-1, for example). Bamboo makes it easy to spot which plans have branches by displaying the branch symbol. 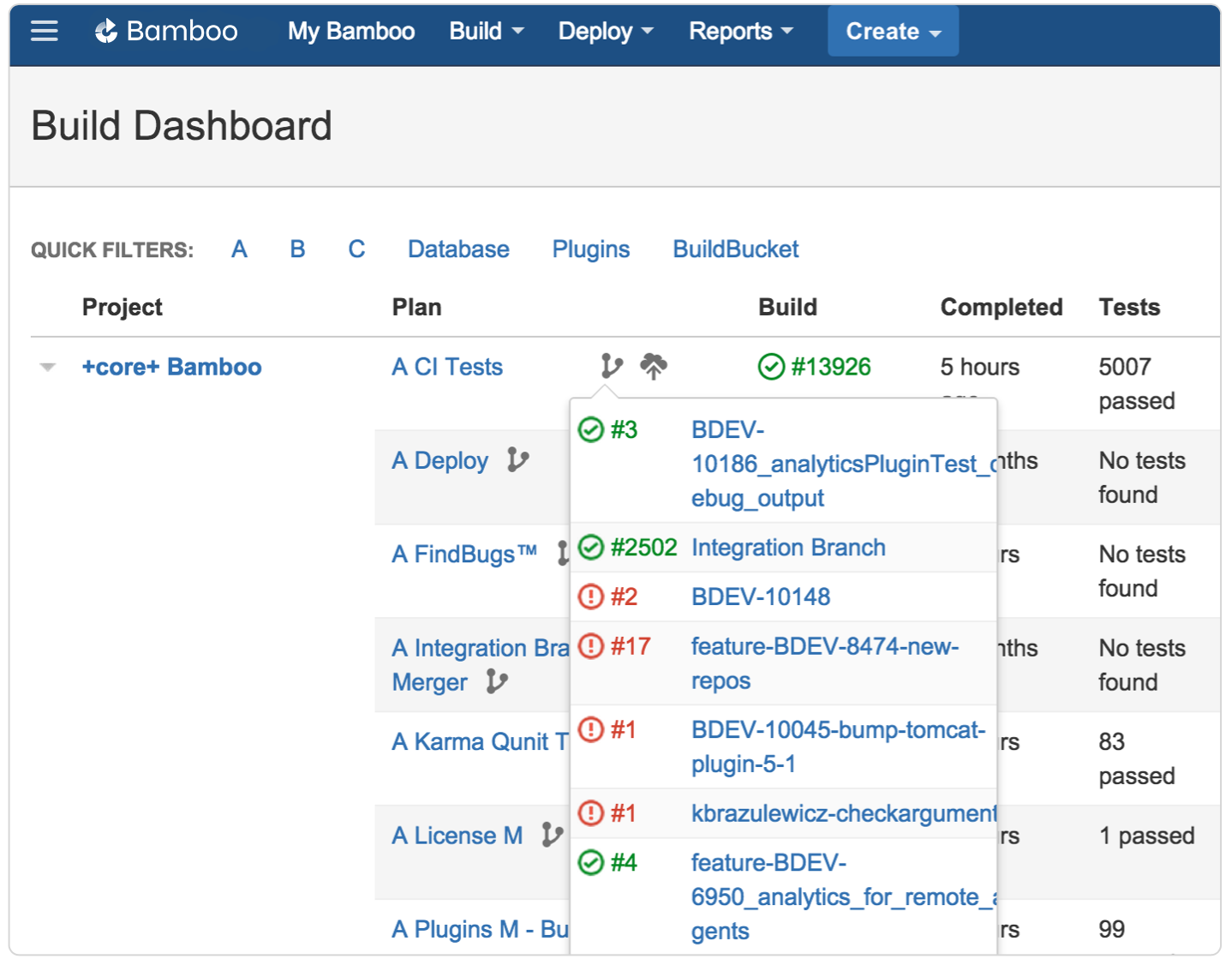 To set this up for an existing plan...

From here, we can configure Bamboo to automatically detect new branches in the repository, and create the corresponding plan branch. Note that automatic branch detection is currently available for Git, Mercurial, and Subversion repositories only. But don't feel left out if you use another version control system like TFS or Perforce – you can create a plan branch manually, too.

Pro Tip: You probably won't want to build every single branch you create. If you use a naming convention where all branches that you want tested start with "feature-*", for example, then Bamboo can be configured to only create plan branches that match that prefix. (You can use regular expressions in these configs, too). 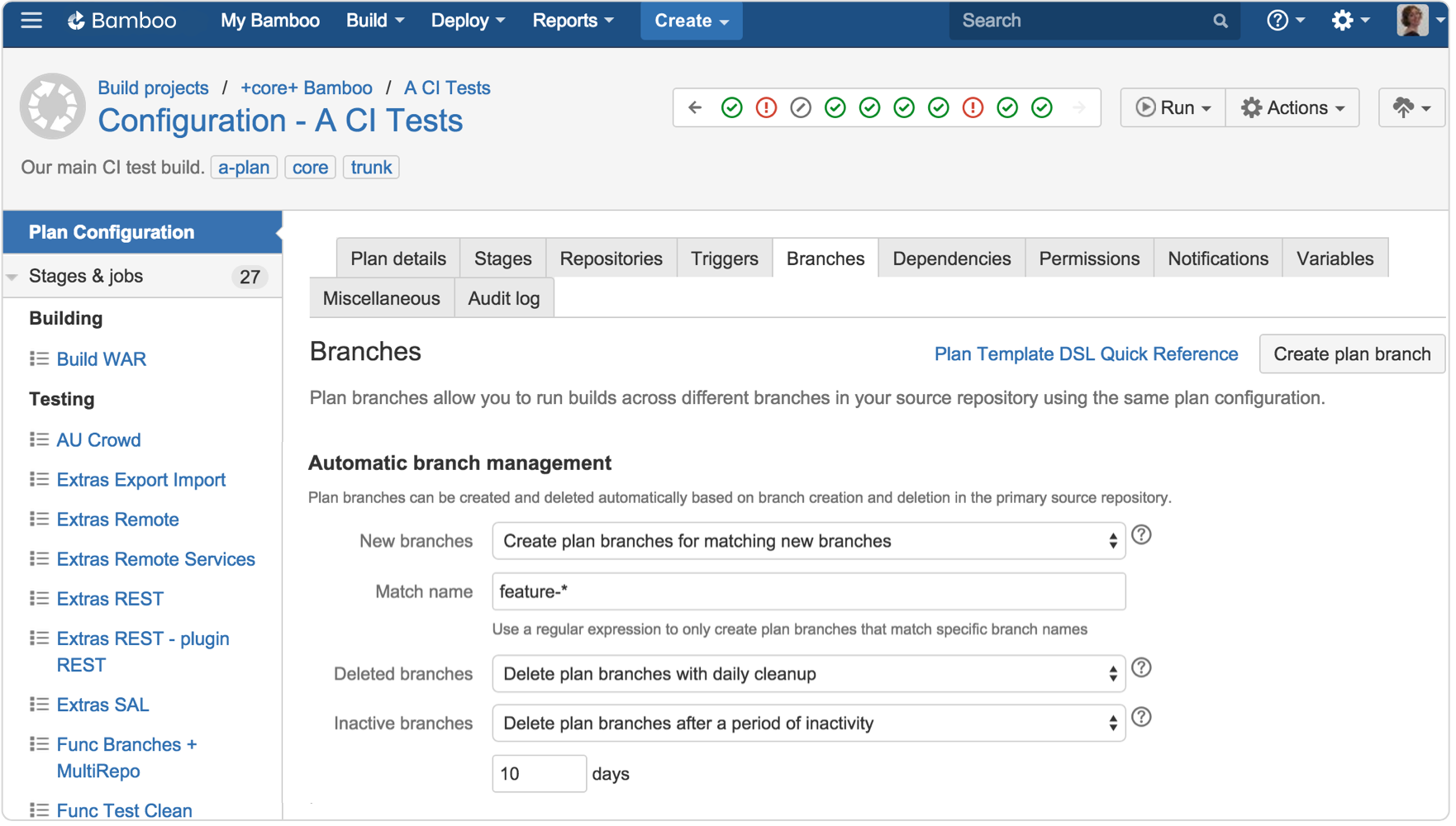 Since most feature branches are short-lived (3-4 days at most), you can configure the plan to remove the branch and its build results from Bamboo after a certain number of days of inactivity. This can be disabled on a per-branch basis if you want to keep it around for an indefinite amount of time, after which you will have to remove it manually. Don't worry: whether you remove a plan branch automatically or by hand, Bamboo won't remove the branch itself from your repository – we leave that decision up to you. That said, disabling automatic cleanup outright for some branches is a good idea for situations where you might maintain a long lived "stable" branch of your project.

Building every branch the easy way 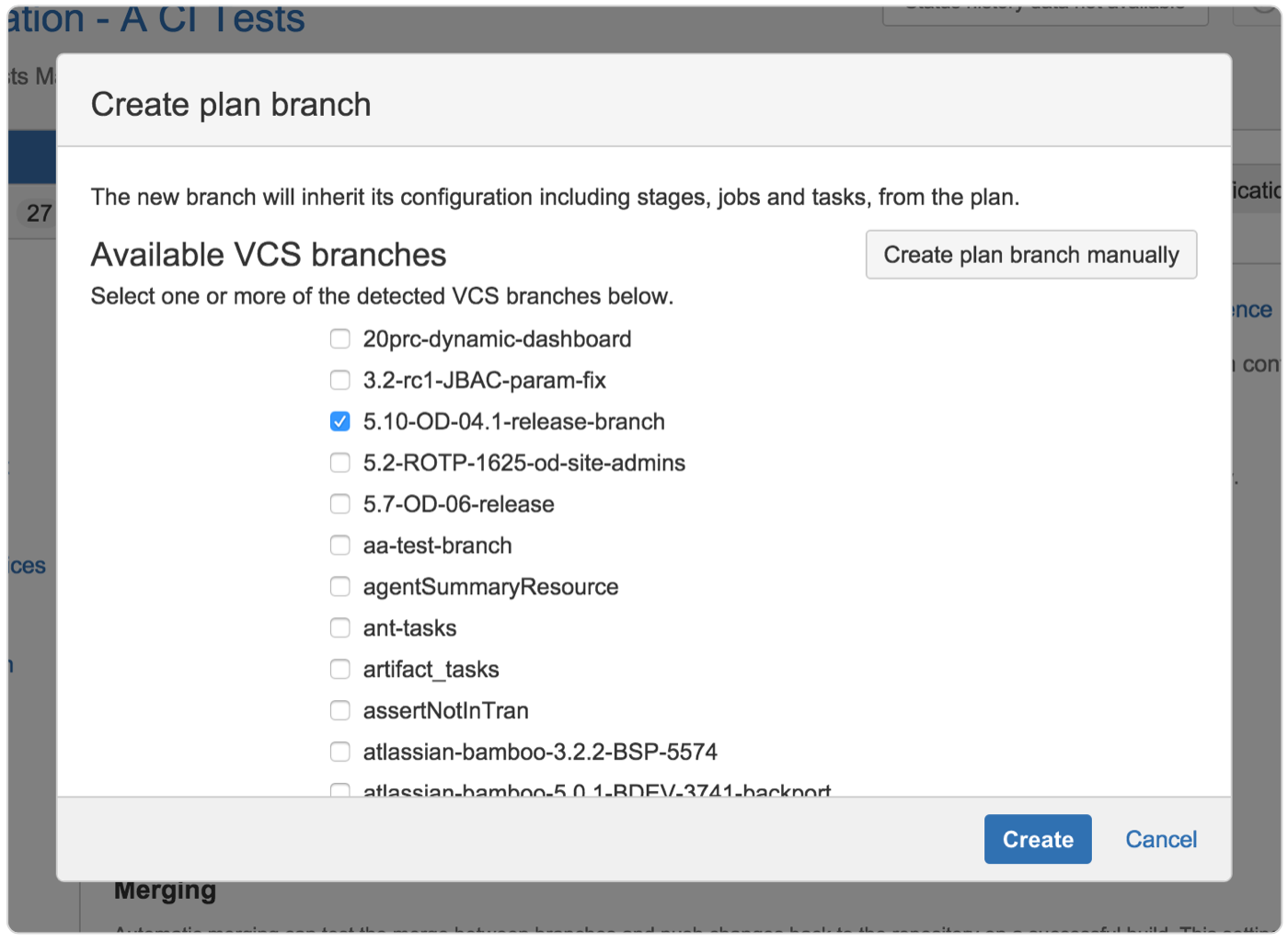 You can now disable the automatic cleanup for the current Plan Branch if you wish, and in the case of DVCS repos, configure a Merge Strategy. Merge Strategies allow Bamboo to automatically merge code between branches on successful builds (more on that later). It is also possible at this point to override repository information (if you are using Plan Branches with Subversion, you can change the SVN URL from trunk to branch here) or override build variables. For example, you might have a variable that specifies whether you are going to deploy to production that you may want to change for the Plan Branch. 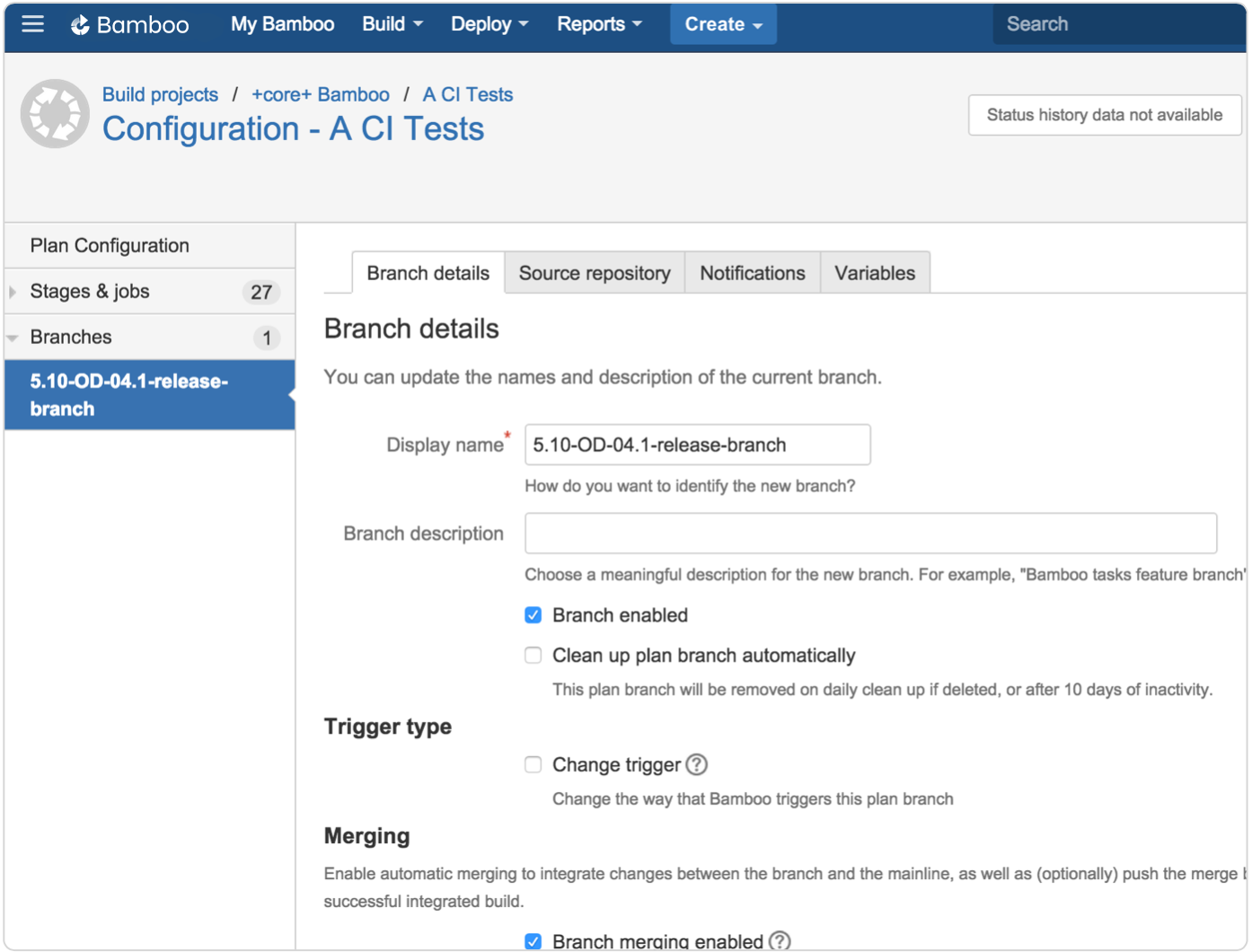 Because the build steps for parent plan builds and plan branch builds work exactly the same, configs like triggers and notifications will be inherited from the parent plan. However, you can override those settings (and more) on a per-branch basis in each plan branch's configs.

Since you don't really know if everything works until you've merged changes to (or from) main, Bamboo provides two ways to do that automatically in DVCS repositories. We call these options "Branch updater" and "Gatekeeper," and you can use either method on any plan branch. Before the build runs, Bamboo will merge the latest from main into the branch if you're using branch updater, or checkout main and merge changes up from your branch if you're using gatekeeper. (More on choosing a merge model in the Bamboo docs.) Bamboo then proceeds to run the build.

If the build is successful, and you've enabled the push on success option, the merge is automatically committed and pushed to the repo. If you are using the gatekeeper model, this means changes on branch are pushed to main. If using the branch updater mode, the feature branch is brought up to date with changes happening on main. 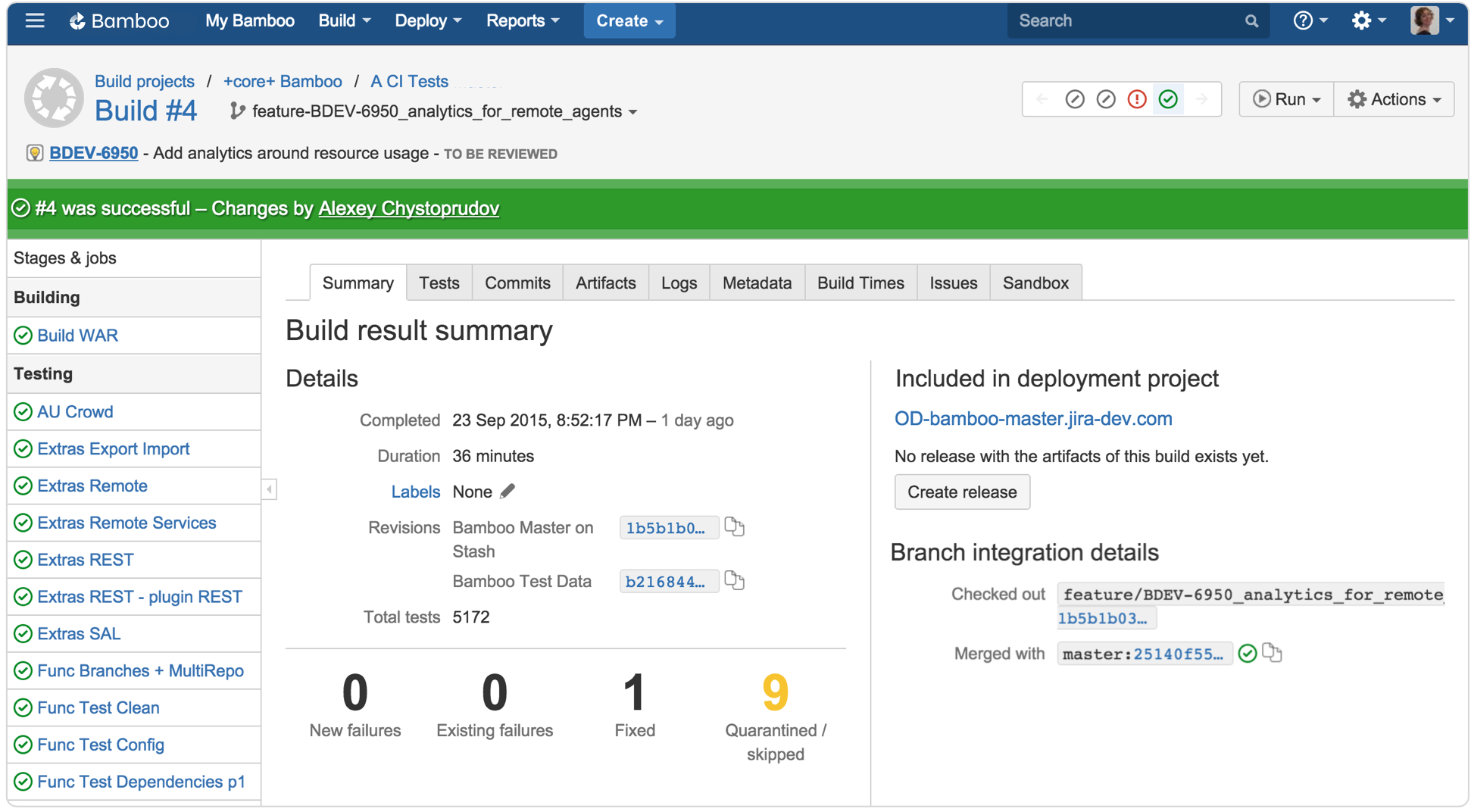 As I mentioned earlier, plan branches can be connected with deployment projects and become part of that phase of the continuous delivery cycle. Keep reading to learn more about that.

I'm a Product Marketing Manager for Atlassian's developer tools. With a focus on CI and Bamboo for the past two years, I love introducing tools that make continuous integration and delivery easier and faster. When not playing with Bamboo, reading developers blogs, or exploring the marketing world, I spend my time drawing, running, and enjoying a good book.

Read this article
Up Next
Continuous Delivery articles