10 tips for configuring your builds with Bamboo specs

Get started with configuration as code in Bamboo with 10 tips & tricks straight from the Bamboo team. You'll also learn what's new in Bamboo including new Bitbucket Server integrations.

Bamboo 6 lets every team manage their plans through code. But it's only the start of a journey. At Atlassian, we now configure the vast majority of our builds and deployments with code. Whether you're a new starter or already a user of Bamboo Specs, you're (or will be) facing questions such as "How do I test my Spec before update?", "Can I safely modify this reused Spec component?", or "How do I make Specs more accessible to non-Java teams?".

Join Przemek Bruski, the architect of Bamboo to hear how our teams solved these - and more - problems. Apart from practical tips, we'll also talk about jump-starting your Specs with our exporter, new time-saving integrations with Bitbucket Server, and support for Bitbucket Cloud Pipelines configuration files. 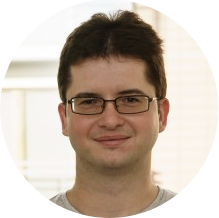 Przemek is the Architect for Bamboo and the person driving the effort behind Specs feature right from the very beginning. He spent his career working for companies big and small. He's also a firm believer in "If you can't automate it, don't use it", making him the perfect person to talk about Specs.